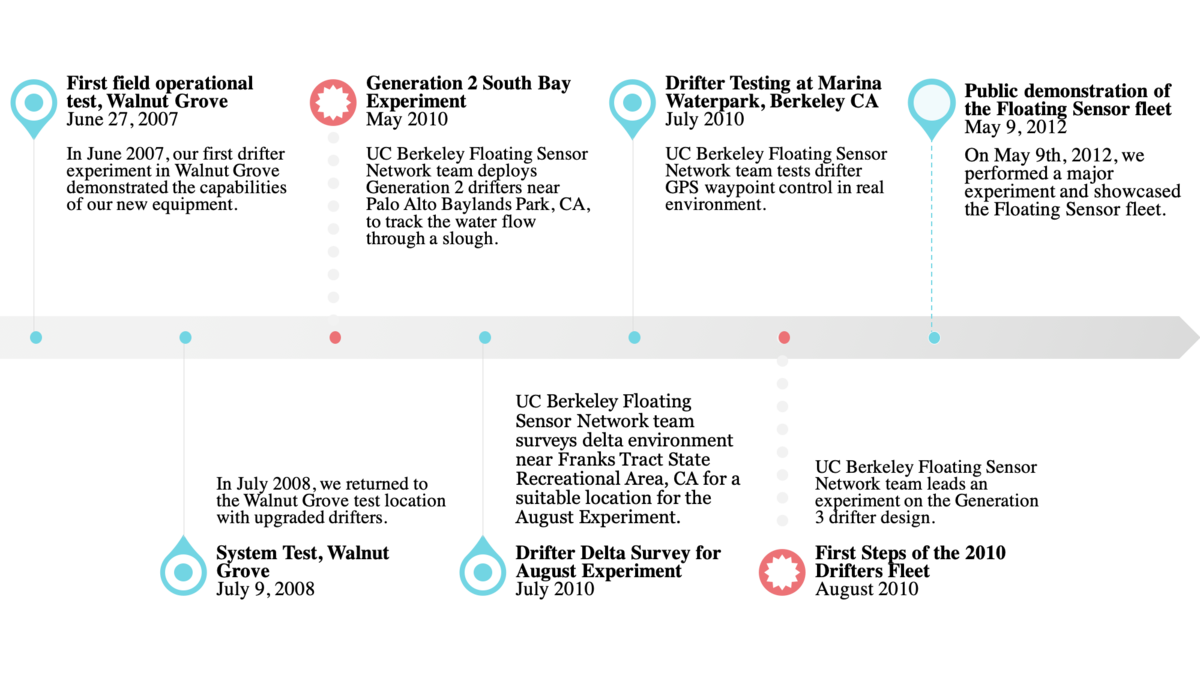 Overview of the Project:

The Floating Sensor Network project at UC Berkeley was a water monitoring system deployed in estuarine environments and rivers, and integrated into existing water-monitoring infrastructure. The vision of the project was to put California water online, create a system that enables water managers and scientists to visualize the evolution of California’s water resources in real time.

The Floating Sensor Network team built 100 motorized drifters, which were communication-enabled, and integrated numerous sensors, including GPS, temperature, and salinity. The fleet is deployable rapidly, in response to unanticipated events such as floods, levee breaches, and contaminant spills. The team also worked on hydrodynamic models (one and two dimensional shallow-water equations) and inverse modeling algorithms (Ensemble Kalman Filtering and its extensions) to integrate these measurements in the models. Jointly with the Lawrence Berkeley National Laboratories and the California Department of Water Resources, the team developed computational infrastructure that ran online (Web-based), and integrated, in real-time, the measurements from static sensors (for example, USGS permanently deployed sensing stations), mobile measurements, and any other data feed available, to estimate river flow and contaminant propagation in real-time, using the online measurements. The results were available to users in the form of “water maps” that show the motion of water in real-time, and corresponding transported quantities (such as salt).

How the System Works:

Mobile, portable, floating sensors were placed into the flowing water where they were needed, and were carried by the current through the area of interest. Data sent from the sensors is used to estimate and produce maps of water flow. The devices transmit information to the responders using the cellular phone network as well as short-range wireless radios. As the sensors were carried by the water, their GPS receivers kept track of their movement. This provided a snapshot of the direction and speed of the water at a point. The “particle outcome” (where the sensor ends up) is especially valuable when responders are concerned about the movement of contaminants. The real time information from multiple sensors was then combined to provide a big picture — a situation awareness map — of the entire system. Each drifter traced a different path; combining all these paths together was more informative than the individual parts. Imagine a “traffic map” for an entire delta, showing the speed of water, how deep the water is everywhere, and how contaminated the water is.

The basic idea in the framework is that multiple flow model instances are running on a cluster of computers in real time and they communicate to the central server that performs the data assimilation using an Ensemble Kalman Filter (EnKF) algorithm. Since EnKF is a Monte Carlo type algorithm, the result of the algorithm is an ensemble of states. These states are evolved independently (of each other) in the flow models on the client computers during the data assimilation. The ensemble is collected and updated by the EnKF server with the drifter measurements, and hence one data assimilation cycle is accomplished.

Applications of the Project:

The UC Berkeley Floating Sensor Network team has performed numerous field operational tests as part of the project, to test the sensing capabilities of the fleet, the quality of GPS signals on water, the communication infrastructure and the modeling capabilities of the system. The team has successfully completed tests with the Department of Homeland Security and US Army Corps of Engineers, CALFED, the Navy, and CITRIS.