UC Berkeley is pleased to release data from the Mobile Century field test. Learn more about the experiment at the project page.

In addition to the cell phone data collected during the experiment, the download includes data extracted from video recordings of the experiment, and data from in-road sensors that the project used to validate the cell-phone-generated traffic information.

As a public university, one of UC Berkeley's missions is to support research. Academic researchers may now download the field test data for non-commercial purposes. To download the data, use the form below to register your contact information and agree to the terms of use.

The Mobile Century data was collected on February 8, 2008, as part of a joint UC Berkeley - Nokia project, funded by the California Department of Transportation, to support the exploration of uses of GPS enabled phones to monitor traffic. In addition to the cell phone GPS data, two additional data sources are available for the experiment site. Inductive loop detector data obtained through the Freeway Performance Measurement System (PeMS), and travel time data obtained through vehicle re-identification using high resolution video data are included with this release. All identifiers assigned to the cell phones used during the Mobile Centuryexperiment have been randomized to protect the participants in the experiment. The video data is also processed and random number has been assigned to represent each vehicle. An extensive description of the experiment and data is available in the following article: Herrera, J.C., et al. "Evaluation of traffic data obtained via GPS-enabled mobile phones: The Mobile Century field experiment". Transport. Res. Part C (2009), doi:10.1016/j.trc.2009.10.006. Additional information about the successor project, known as Mobile Millennium, is available at http://traffic.berkeley.edu. By downloading the data, the user acknowledges that:

The data is available for use for research and analysis purposes only.
He/she will not redistribute the data.
Any publication using the data should refer the following article: Herrera, J.C., et al. "Evaluation of traffic data obtained via GPS-enabled mobile phones: The Mobile Century field experiment". Transport. Res. Part C (2009), doi:10.1016/j.trc.2009.10.006. 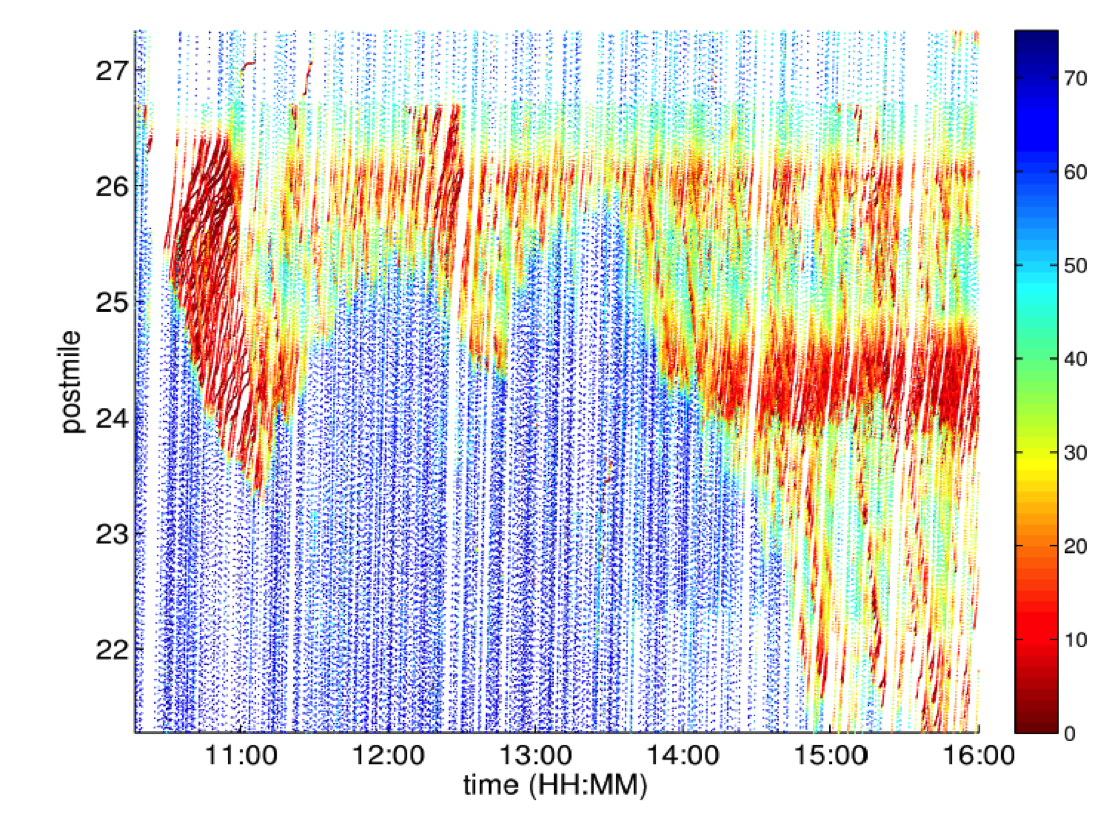 2  DESCRIPTION OF THE DATA

Geographical locations of the Northbound and Southbound inductive loop detectors extracted from the PeMS database are given in two files:

These files have the following columns: "pems_id", "abs_pm", "lat" and "lon", see Table for detailed explanation.

Ground truth travel time data is provided between Stevenson Blvd and Decoto Road and between Decoto Road and Winton Avenue for the Northbound direction of Interstate 880. Data are stored in files

Snapshots of the 100 vehicle field operational test we ran on Feb. 8, 2008:
A: Launch area for the 100 vehicles upon release into the freeway network.
B: Video recordings from high rise construction along the freeway (note labels on test vehicles)
C: test vehicles entering mainline from onramps (note labels on cars)
D: Batch of vehicles (33 out of 100 vehicles) right before release into the network
E: guest area on staging site adjacent to driver rest area.
F: Colonel Osama Elhamshary (now a California DOT employee) running the command and safety center for the experiment on the deployment site.
G: Video cameras deployed on bridges for full license plate reader (LPR) recording of all vehicles