Our core values are aligned with the UC Berkeley College of Engineering. Quoting: “Berkeley Engineering believes that a diverse student body, faculty and staff are critical to our mission of Educating Leaders, Creating Knowledge and Serving Society. Rooted in our mission are Principles of Community by which our campus operates. These principles reflect the deep commitment of our college and campus to contributing to a safe, caring and humane environment, one in which every member of our community can thrive The college’s faculty and staff [...] support first-generation students, underrepresented minorities, women, transfer students, veterans and others — and they provide significant backing for ongoing and expanded opportunities.”

Numerous members of the lab are  involved in a variety of outreach activities in support of these values. This page summarizes some of the work we have been doing.

One of the major activities we conduct is coaching FIRST LEGO League (FLL) teams. FLL is an international competition organized by FIRST for elementary and middle school students (ages 9-14 in US and Canada, ages 9-16 elsewhere). Each August, FIRST LEGO League introduces a scientific and real-world challenge for teams to focus and research on. The robotics part of the competition involves designing and programming LEGO Mindstorms robots to complete tasks. The students work out solutions to the various problems they are given and meet for regional tournaments to share their knowledge, compare ideas, and display their robots. FIRST LEGO League is a partnership between FIRST and the LEGO group. It also has a scaled down robotics program for children ages six to nine called FIRST LEGO League Junior.

We have been working with local schools and organizations. In particular, we are associated with Piedmont Makers, which is a 501c3 nonprofit corporation dedicated to support and inspire K-12 STEM education in science, technology, engineering, art, design, and math in Piedmont, California and beyond. We are also working together with the Ecole Bilingue (EB) in Berkeley to help them create an FLL program.

Some of our team members have volunteered their time to be coaches of some of the teams competing in the FIRST LEGO League challenges. For example, for the academic year 2017-18, we coached the Piedmont Maker Team Purple. This was an all-girls, all-rookie team that advanced to the regional competition for North California and ultimately won the best robot prize at Finals, organized by Google. Our coaching not only encompasses aspects of programming and robotics needed for the challenge, it also spans the core values of teamwork as enunciated by FLL.

We also organized numerous visits to different sites to expose the kids to science and technology. For the 2017-18 edition of FLL, the theme was Hydrodynamics. We brought some of the teams to UC Berkeley to visit some of the labs working on topics related to their projects. For example, they visited Professor Steven Glaser’s lab and learned about sensors. They also visited Professor Kara Nelson’s lab and learned about smart toilet technology. Additionally, they visited the CITRIS museum of technology and were given presentations on robotics. Some of the teams visited the campus, and this time got presentations from two astronomy professors, Professor Joshua Bloom and Professor Alex Filippenko. During these presentations, the kids learned about gravitational waves and the expansion of the universe. After the presentation by the professors, the kids had an opportunity to ask questions to the professors about their projects.

The 2018-19 North California Finals was organized by the Institute of Transportation Studies at UC Berkeley. This year's theme, Into Orbit, transported about 40 teams of elementary and middle school students into space, where they learned to explore, challenge and innovate with a research project, core values and built an autonomous robot to perform tasks on the moon. Part of their accomplishments include building and programming an autonomous robot using LEGO MINDSTORMS to solve a set of missions (activities related to space exploration) on a playing field within a two and a half minute round. Teams were allowed four rounds to complete as many of the missions they could, including crater crossing, solar panel array, move space station modules, and meteoroid deflection, among others. In addition, teams created a project that identified a problem today’s scientists and engineers are trying to solve, create an innovative solution and share it with others with a display and Q and A. 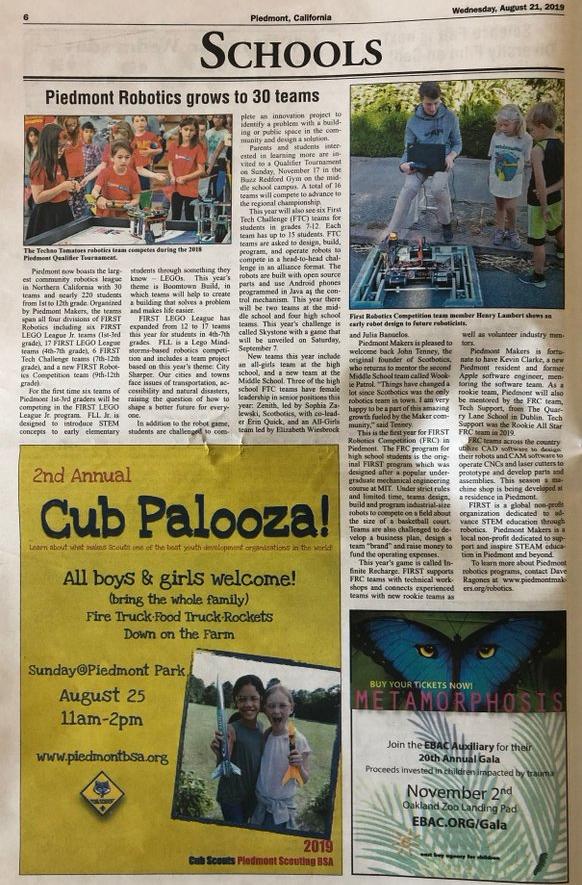 The Piedmont robotics teams grew from zero to 30 FLL teams over the course of 3 years. 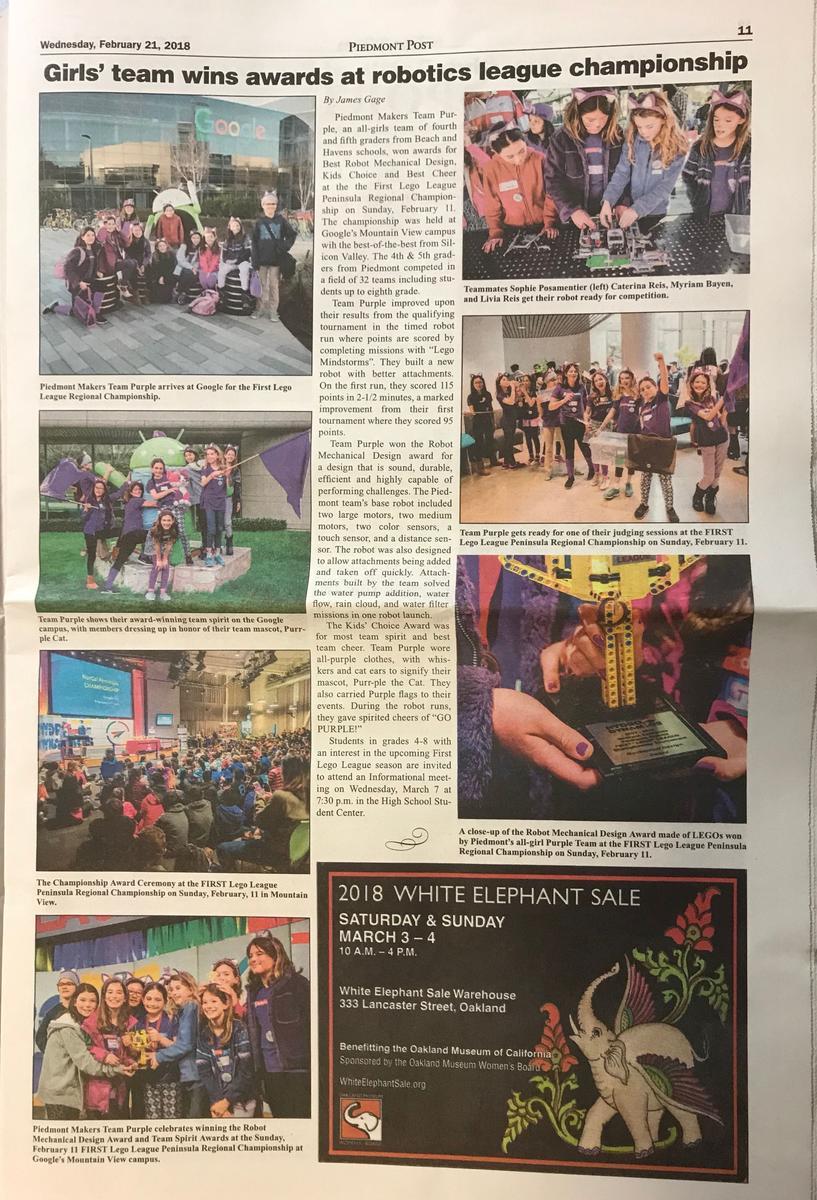 We are also involved on campus with Berkeley Girls in Engineering, which is a middle school girls program that runs on the campus of UC Berkeley during June and July each year.  Each week, the girls are introduced to different areas of engineering through fun and engaging modules by women volunteers (undergraduate, graduate students and postdocs in engineering) from UC Berkeley. Shu-Xia Tang, helped in self-driving car (Evo robot) modules taught in June 2018. Jessica Lazarus gave interactive presentations on the technology of automated vehicles and led several hands-on activities using the Ozobot Evo coding robot as an analogy for self-driving vehicles. She also volunteered with Kaboom! to build a playground in East Oakland alongside community members and volunteers from sponsoring organizations: Oakland Housing Authority, Pixar Animation Studios, and Disney. Specifically, Lazarus got to help build the planters and walkway for an edible garden and put together two soccer goals.

In 2019-2020, as part of our outreach efforts, students of UC Berkeley work with students of Ecole Bilingue  (EB) in Berkeley. Riddhi Bagadiaa, an undergrad at UC Berkeley, conducted a semester-long Tech program for grade 4 and 5 of the Elementary School. The main focus was to introduce students to building, creating and programming, understanding the applications of technology in the real world and preparing for the FIRST LEGO League.

Under the guidance of Professor Bayen, Headmaster Sébastien Robert and Professor Isabelle LeBlanc, the science teacher at Ecole Bilingue, Riddhi designed a curriculum for the students and worked rigorously on different interesting projects with them to give them a practical understanding of what they were doing.

The program got off to a strong start in February with forty grade 4 students. The goal was to work on LEGO Mindstorms with them so that through different projects they would gain an intuitive understanding of how technology is best used and acquire the skills to participate in the national competition. The enthusiastic students started off by building a robotic car. While a step by step procedure was provided to familiarise them with different parts and sensors, students were encouraged to think creatively and explore different designs, so they could build their own unique car which served a common purpose. They were extremely active and came up with the most beautiful models, with high quality design and functionality. After being introduced to the foundations of programming such as loops, conditional statements and variables, the students were able to strengthen their knowledge of the concepts through the EV3 Classroom block programming software. By building a simple yet fancy car in the first class and programming it visually to provide functionality to the bot, they were able to get a holistic idea of what robotics entails. However the plan of following up with large projects was cut short as everything went remote and access to hardware equipment was not possible under COVID-19, and will hopefully happen in the future. To stay on par with the excitement developed in the students, remote classes were still held and the focus was shifted to programming in Scratch, similar to grade 5’s curriculum. 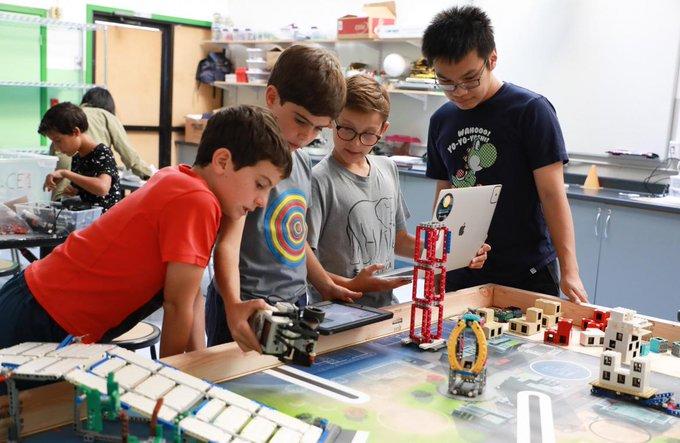 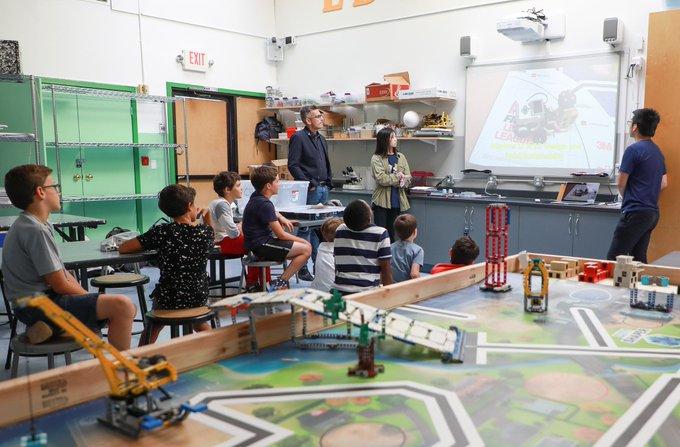 Students learning the foundations for building a robotic car.

The Grade 5 curriculum was designed to increase their exposure to coding logic and applications of programming using the programming software, Scratch. Scratch’s object oriented programming features and simple block structure made it the perfect introductory language. Over the course of the semester, the students worked on three small to medium sized projects individually. While the classes were initially in person, they were soon shifted to recorded lectures. The lectures promoted creativity, and freedom of thought and exploration. “Avoid the falling Doughnut” where a player has to avoid doughnuts falling from the sky and “Hit the Target” where the player has to aim snowballs at a target, are common games that the students implemented to get a sense of how games are created and the different aspects that must be kept in mind while building something for a user. Each student brought a variety of unique ideas and methods to the table and keenly enhanced their personal projects in their own ways.

Grade 4 had less experience with programming so the projects done were different. Projects focused on solidifying basic concepts and encouraging computational thinking. Tasks were given to the students along with an idea of which blocks could be of potential use to solve the task. Visuals, sounds and vibrant objects were used to make the challenge more interesting and make the learning process fun. Activities entailed moving their name around the screen using different concepts and making the letters of their name dance to the beat of music. These techniques worked well with the students and produced innovative results.

Such projects help UC Berkeley students engage with the Bay Area community and spread awareness about technology and also gives elementary school students to learn something outside of their school curriculum. 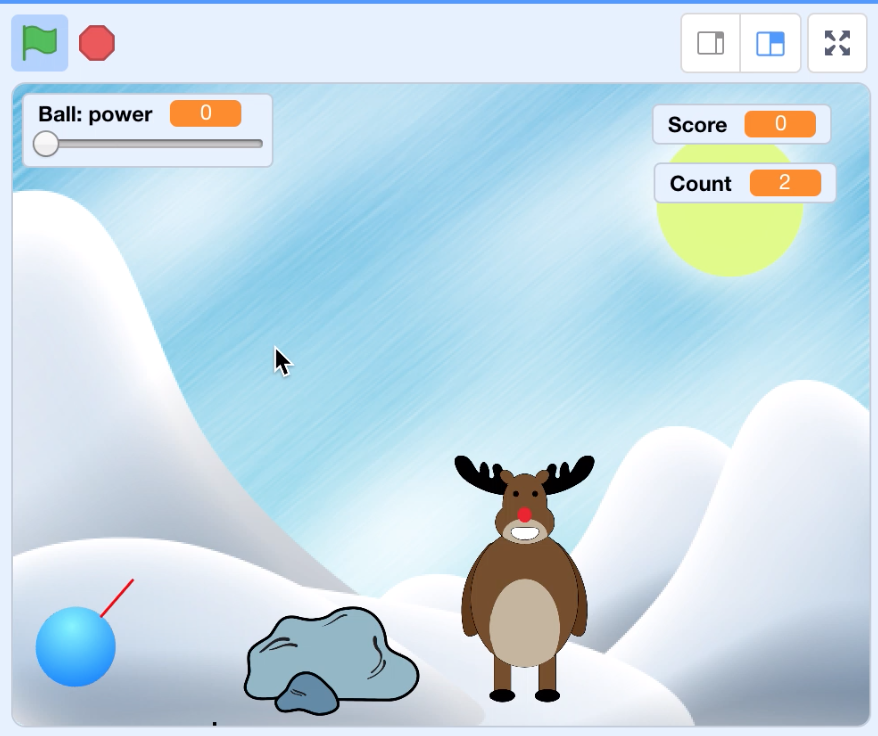 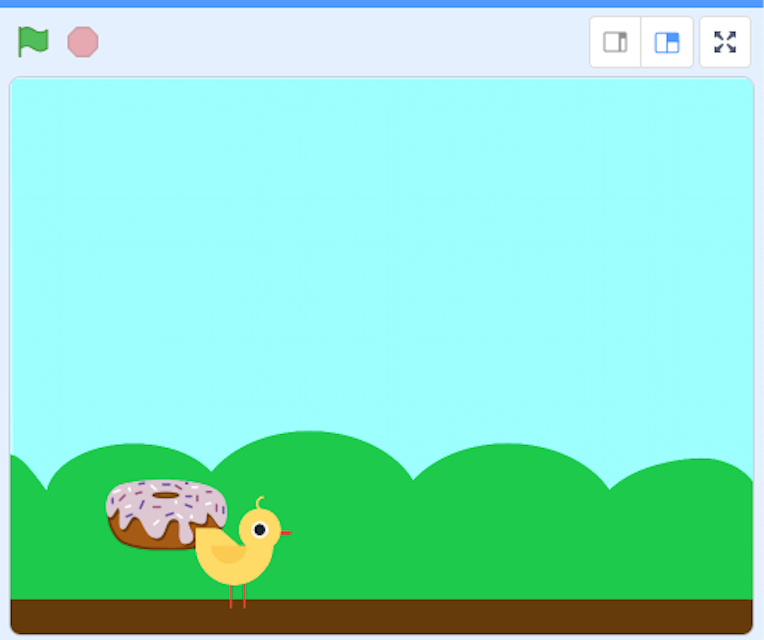 Students of grade 5 designed their own version of “Avoid the falling doughnut game” using Scratch.